Simultaneous phase and intensity scintillation from Cas A

The scintillation due to the ionosphere of Cassiopeia A seen on Christmas Day 2013 from KAIRA, in which the source was observed to shift position and shape, was followed exactly 48 hours later by a period of calm when Cassiopeia A could be seen in the same part of the sky but with virtually no scintillation.  This meant that the quiet day could be used to ascertain the "real" position of Cassiopeia A at the same local sidereal time and the movement of the source relative to this due to the scintillation measured.   The technique described in Monday's 'blog post was used to calculate phase  directly from the imaging, both in terms of the location of the source relative to the image centre and relative to the "real" position measured on the quiet day. 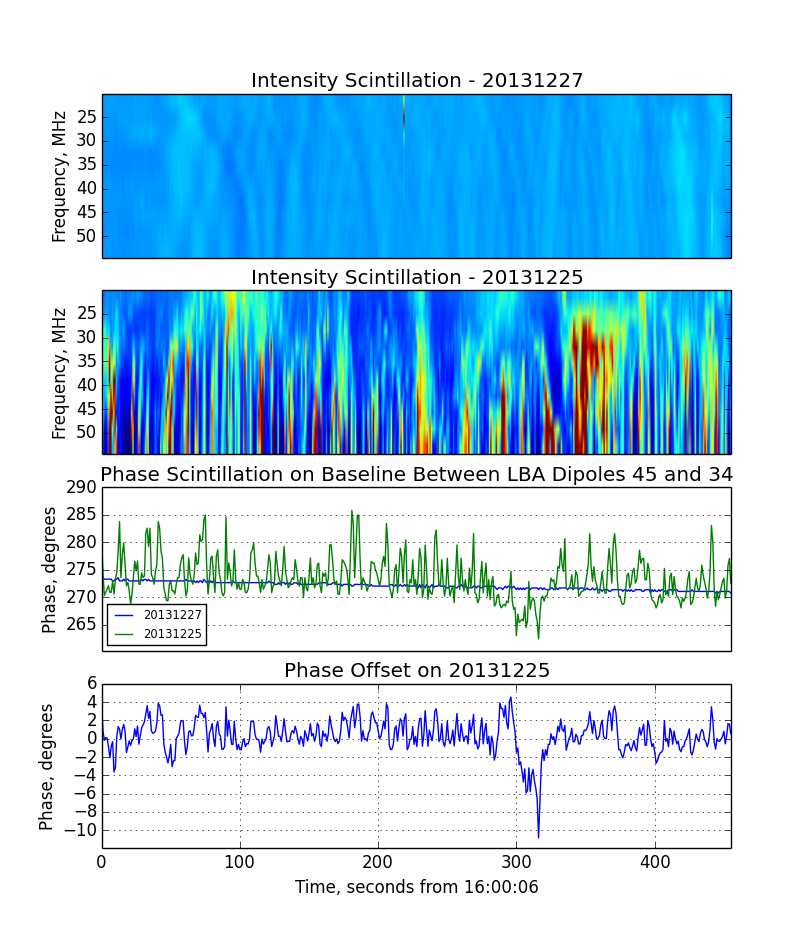 In the plots above, the top two panels show dynamic spectra of the intensities measured on both days using beam-formed observations.  The third plot shows the phase for the location of Cassiopeia A in the all-sky images, relative to the baseline between LBA antenna numbers 45 and 34.  The scintillation is easily seen in the rapid variation of phase seen on the 25th December 2013, with the phase on the 27th being almost constant (the slight downwards trend is due only to the daily movement of the source across the sky).  The lower plot is phase calculated from the relative positions of Cassiopeia A on each day and illustrates the movement of the source around its "real" location.
Posted by Richard Fallows at 07:00