A bit less than two months after its submission, my first paper was accepted for publication in the Journal of Geophysical Research – Space Physics. The reference is:

The early-access version can be found here.

Abstract:
The Mars Express Radio Science (MaRS) experiment on board Mars Express has been providing radio-occultation data since early 2004. The analysis method currently used to retrieve neutral atmosphere and ionosphere profiles is based on the resolution of a complex inverse problem. The solution to such a problem is obtained under strong assumptions on the atmosphere and the ionosphere and with some limitations. Here we developed a novel method for radio-occultation data analysis based on a direct approach which overcomes some of the difficulties related to the standard inversion. This new method is based on a numerical model of the atmosphere and the ionosphere of Mars computing the propagation of the radio waves from the spacecraft to the receiver on Earth. The main interest of such an approach lies in the intrinsic and coherent coupling between the neutral part and the ionized part of the planetary environment, which gives physical constrains on the retrieved profiles. We have applied this new method to radio occultation experiments performed by MaRS, and we present the results obtained in two different occultation configurations. We discuss the differences which emerge from the standard analysis and the gain that such a method can give to the analysis of planetary environments.

We had a bit nervous day with KAIRA operations. KAIRA went silent around 10-11 am (LT). We learned  that this was due to a power line failure ~20 km north of Kaaresuvanto. The reason was a broken power line. Some other structures had failed also. Apparently in that region there has been freezing rain and heavy snowfall. Hence, frost in the power lines and the power failure. Here’s the news in Finnish about the Kilpisjärvi/KAIRA power failure: http://www.iltasanomat.fi/kotimaa/art-1419313726115.html


KAIRA came back online a bit after 20:00 LT. Hence, we are rather happy that we do not need to drive up to Kilpisjärvi for maintenance operations in Christmas Eve. It has been really cold in Kilpisjärvi during the last days. Temperature has dropped down to around -30 C. Despite of the ~10 hour power break. KAIRA survived and the operational temperature was 8.30 C when KAIRA came back online.

One interesting news: 2016 there will be a new 45 kV power transmission line. The current 20 kV line will serve as a back-up line thereafter. Hence, looking forward to an upgraded power service in the near future! 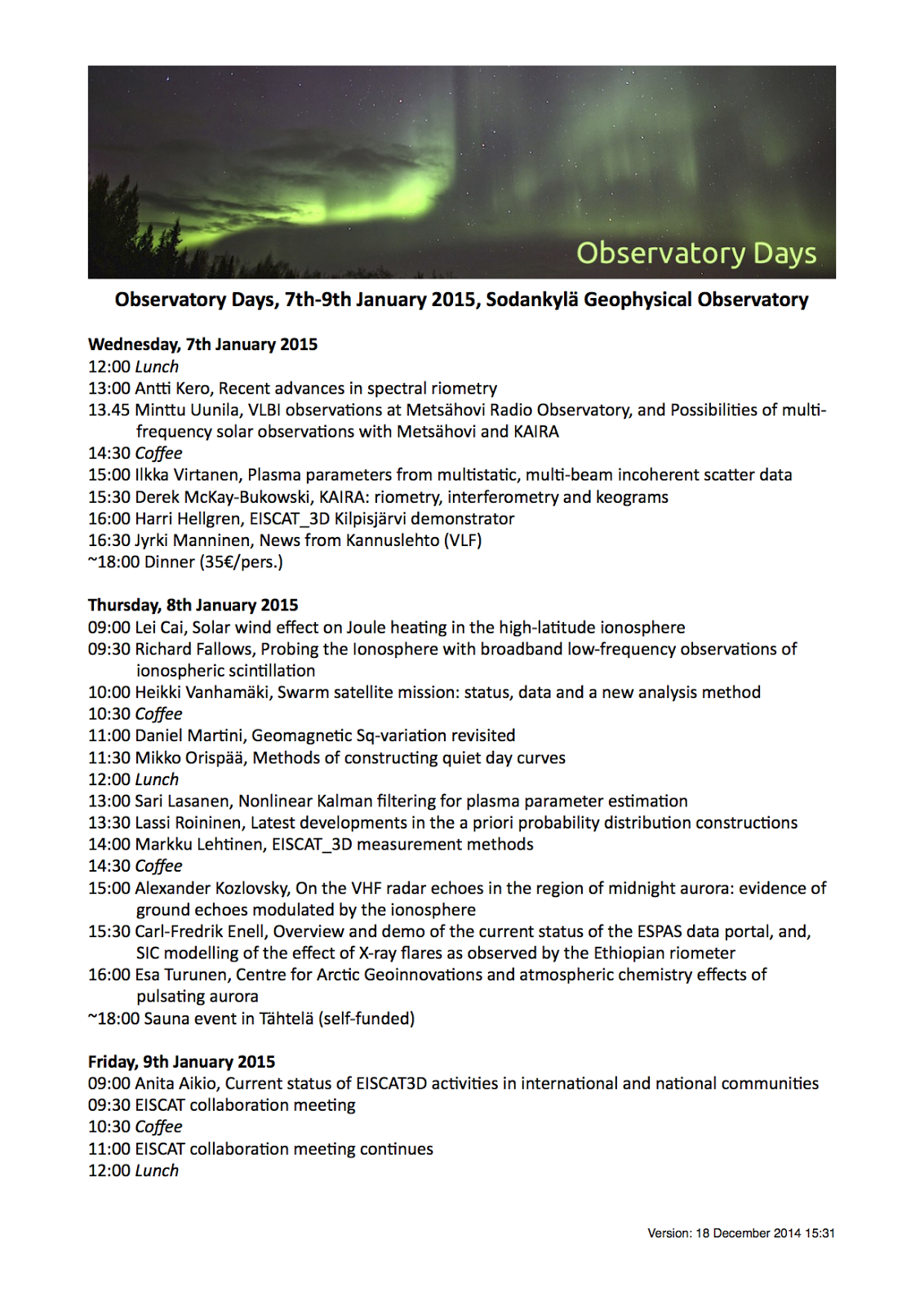 
The Observatory Days 2015 shall be at Sodankylä Geophysical Observatory 7-9 January 2015. This is the final announcement. If you wish to participate, please send an email to lassi.roininen'at'sgo.fi (preferably as soon as possible). If you wish to talk, please send also your talk title.  The event will run all the way from Wednesday midday till Friday midday. The event website is at http://www.sgo.fi/~thu/SodankylaSeminars/index2015.php.

The next Finnish EISCAT Collaboration Meeting will be part of the Observatory Days and take place on Friday, 9th January 2015, in the morning.


There shall be no fee, but the lunches and coffees will be organised via prepaid coupons sold by our canteen that you can purchase when you arrive. 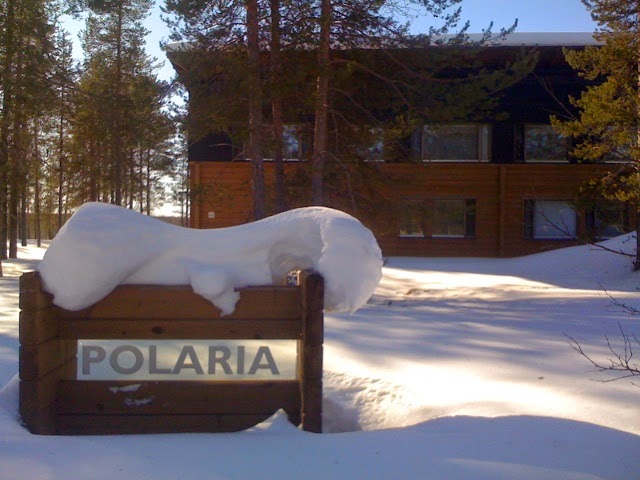 Email ThisBlogThis!Share to TwitterShare to FacebookShare to Pinterest
Labels: English

We report that our latest study on multistatic, multibeam ISR, i.e. using EISCAT VHF incoherent scatter radar in conjunction with KAIRA receiver, has been accepted for publication in Journal of Geophysical Research - Space Physics. The paper is available as an early access version here. The reference is:


Multistatic incoherent scatter radars are superior to monostatic facilities in the sense that multistatic systems can measure plasma parameters from multiple directions in volumes limited by beam dimensions and measurement range resolution. We propose a new incoherent scatter analysis technique that uses data from all receiver beams of a multistatic, multi-beam radar system and produces, in addition to the plasma parameters typically measured with monostatic radars, estimates of ion velocity vectors and ion temperature anisotropies. Because the total scattered energy collected with remote receivers of a modern multistatic, multibeam radar system may even exceed the energy collected with the core transmit-and-receive site, the remote data improves the accuracy of all plasma parameter estimates, including those that could be measured with the core site alone. We apply the new multistatic analysis method for data measured by the tristatic EISCAT VHF radar and the KAIRA multibeam receiver and show that a significant improvement in accuracy is obtained by adding KAIRA data in the multistatic analysis. We also demonstrate the development of a pronounced ion temperature anisotropy during high-speed ionospheric plasma flows in substorm conditions.

This week, the first KAIRA paper detailing the ionospheric scintillation observations we've been performing, and the "scintillation arc" phenomenon we've noted in the KAIRA blog (http://kaira.sgo.fi/2014/07/ionospheric-scintillation-arcs.html) was accepted for publication in the Journal of Geophysical Research.  The image shown is of a poster presented at the recent European Space Weather Week which summarises this work, along with a few more recent results taken with LOFAR.  The abstract of the paper follows and the full work can already be found online (http://onlinelibrary.wiley.com/enhanced/doi/10.1002/2014JA020406/). 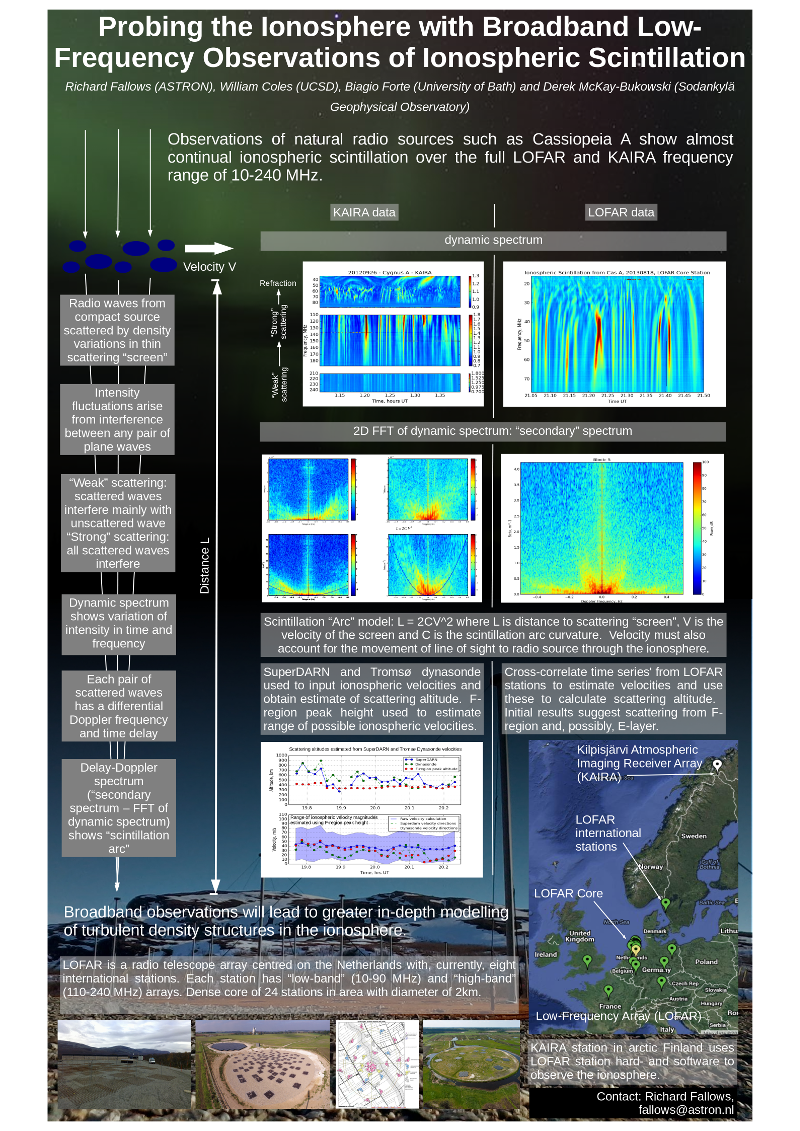 Intensity scintillations of cosmic radio sources are used to study astrophysical plasmas like the ionosphere, the solar wind, and the interstellar medium. Normally these observations are relatively narrow band. With Low Frequency Array (LOFAR) technology at the Kilpisjarvi Atmospheric Imaging Receiver Array (KAIRA) station in northern Finland we have observed scintillations over a 3 octave bandwidth. “Parabolic arcs”, which were discovered in interstellar scintillations of pulsars, can provide precise estimates of the distance and velocity of the scattering plasma. Here we report the first observations of such arcs in the ionosphere and the first broad-band observations of arcs anywhere, raising hopes that study of the phenomenon may similarly improve the analysis of ionospheric scintillations. These observations were made of the strong natural radio source Cygnus-A and covered the entire 30-250 MHz band of KAIRA. Well-defined parabolic arcs were seen early in the observations, before transit, and disappeared after transit although scintillations continued to be obvious during the entire observation. We show that this can be attributed to the structure of Cygnus-A. Initial results from modeling these scintillation arcs are consistent with simultaneous ionospheric soundings taken with other instruments, and indicate that scattering is most likely to be associated more with the topside ionosphere than the F-region peak altitude. Further modeling and possible extension to interferometric observations, using international LOFAR stations, are discussed.
Posted by Richard Fallows at 18:20 No comments:

Today is the first day of Advent. It is also our first day in SGO without Iina Sirviö, who completed her bachelor thesis last Friday and therefore moved back to Jyväskylä for her studies.

But before leaving, as she knows that chocolate is generally a good remedy against yearning, she offered a nice Advent calendar to all of us. 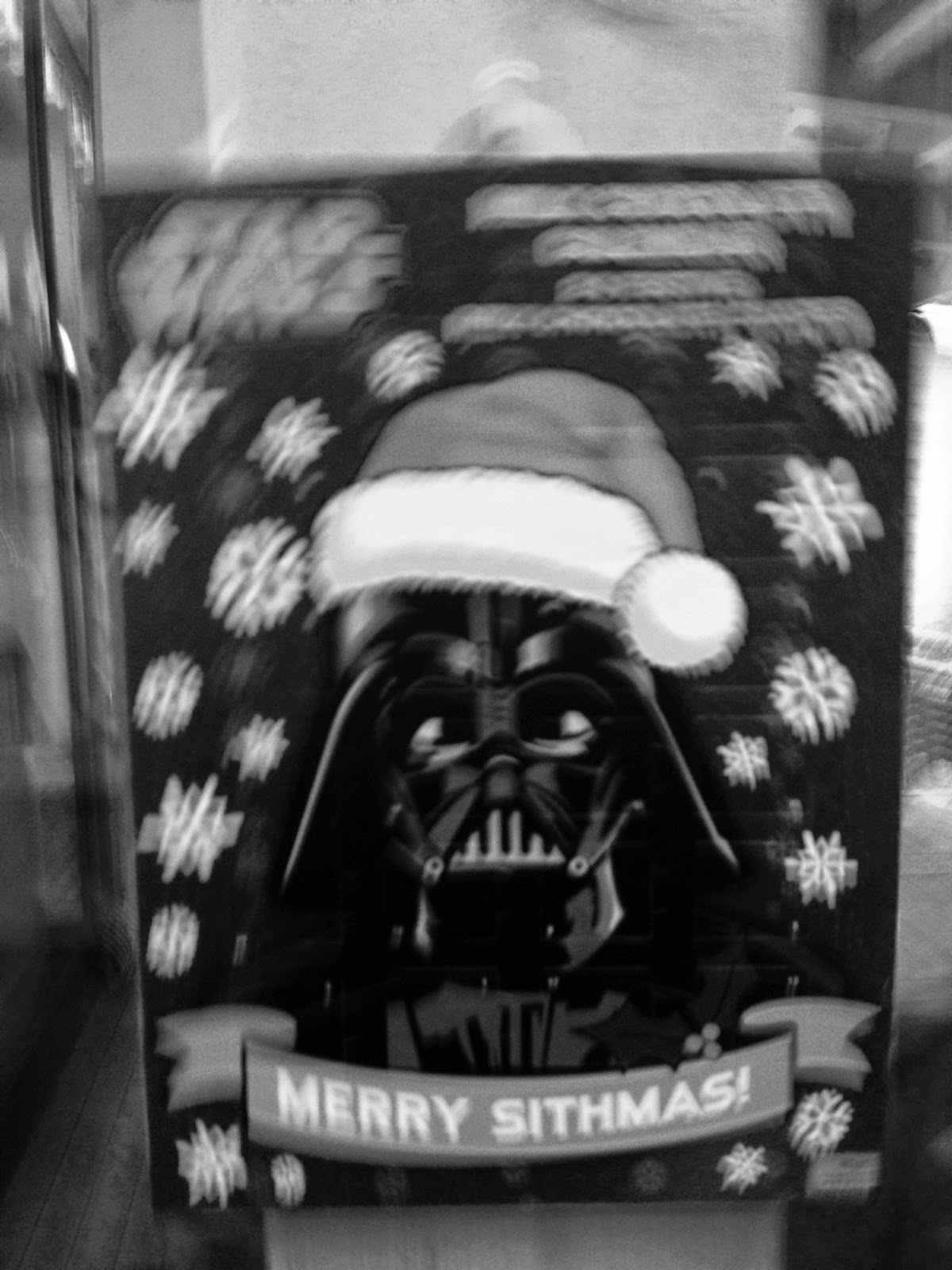 Now, all we need to do is find a fair way to share the chocolates equally, taking into account each one's trips and holidays.