For an interferometer such as KAIRA, the raw data product for imaging purposes is a set of "visibilities" which are essentially the cross-correlations of the voltages sampled by each antenna-pair in the array.  These encode the amplitudes and phases of the interference fringes of any source in the field of view.  An image is obtained via a Fourier-transform-type relation between visibilities and intensities (source brightness) known as the van Cittert - Zernike relation.

For convenience, the antenna co-ordinates are converted into a set of baselines between each pair in a uvw co-ordinate system perpendicular to the source direction where u is towards the east, v is towards the north and w is towards the source.  In the case of KAIRA all-sky images, the source direction is zenith.  The image transform from the visibilities then creates a "flattened" image (orthographic projection) of the visible sky with co-ordinates l,m corresponding directly to u,v (the w direction is neglected in this case).   The phase for a given point on the image and antenna baseline is simply the dot-product of the l,m co-ordinates of the point on the image (basically the normalised number of pixels from the centre in each direction) and the u,v co-ordinates of the antenna baseline (expressed in wavelengths in this case).

The left-hand image above plots the phases for each antenna pair for the location of Cassiopeia A in an image from 16:00 UTC on 2013-12-27 (the image is Hermitian and so only one half is shown).  These have not been arranged in terms of the array layout on the ground, but do show the alternate positive (yellow-red) and negative (blues) phases of the interference pattern.  The maximum phase occurs for the baseline between antennas 43 and 34, indicated by the end of the white line.  A plot of phase with baseline length for antenna pairs along this baseline is given on the right and shows the phase increasing with baseline length. 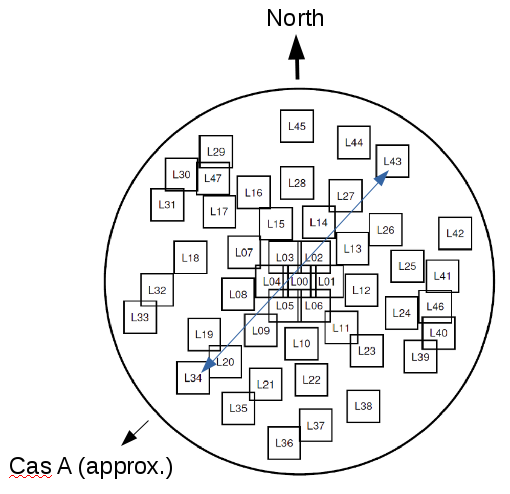 The plot above indicates the location and direction of this baseline on the array and demonstrates that this represents the closest baseline alignment to the direction of Cassiopeia A as seen in the image.

Posted by Richard Fallows at 07:00