Email ThisBlogThis!Share to TwitterShare to FacebookShare to Pinterest
Labels: suomeksi

Our study of the effects of solar wind high-speed streams on the high-latitude ionosphere, based on data from the SGO ionosonde during the years 2006–2008, has now been accepted for publication. An early-access version is available here, and the reference is:

Here is the abstract:

Solar wind high-speed streams (HSSs) are the most important source of geomagnetic disturbances during the declining phase of the solar cycle. Their ionospheric response, especially at high latitudes, is not fully understood yet. We carried out a phase-locked superposed epoch analysis to study the effects of HSSs on the high-latitude ionospheric F region, using data from the Sodankylä ionosonde (L = 5.25) during 2006–2008. We found that the F layer critical frequency foF2 decreases between 12 and 23 magnetic local time (MLT) in summer and around equinoxes for several days. Our interpretation, supported by numerical estimations, is that increased electric fields in the evening sector of the auroral and subauroral regions create ion-neutral frictional heating. Frictional heating will increase the loss rate of O+ due to two reasons. The first one is neutral heating producing thermal expansion of the atmosphere and enhancing N2 and O2 contents at the F region peak. The second one is ion heating which may occur under strong enough electric fields (about 50–60 mV/m), leading to enhancement of the reaction coefficients. An increase in foF2 is observed in two different MLT sectors. First, a short-lived foF2 increase is visible during all seasons near noon on the first day after the arrival of the HSS, possibly triggered by the compressed solar wind plasma pressure pulse, which may produce particle precipitation from the dayside central plasma sheet. Second, foF2 is enhanced for several days in the morning sector during equinoxes and in winter. We suggest that this is caused by the low-energy tail of particle precipitation.

At Sodankylä Geophysical Observatory, we have made continuous ionospheric tomography measurements for one solar cycle. Because of this big database, we have written a dataset paper, and, the paper is now online as a discussion paper in Geoscientific Instrumentation, Methods and Data Systems (an EGU journal).

In the figure below, we have plotted the analysed total electron content (VTEC) values over Kokkola, Finland (averaged from 11-14 MLT). These are compared to the well-established Sun activity indices, the sunspot number and the solar flux index F10.7.

The paper is fully citable as:

Sodankylä Geophysical Observatory has been operating a tomographic receiver network and collecting the produced data since 2003. The collected dataset consists of phase difference curves measured from Russian COSMOS dual-frequency (150/400 MHz) low-Earth-orbit satellite signals, and tomographic electron density reconstructions obtained from these measurements. In this study vertical total electron content (VTEC) values are integrated from the reconstructed electron densities to make a qualitative and quantitative analysis to validate the long-term performance of the tomographic system. During the observation period, 2003–2014, there were three-to-five operational stations at the Fenno-Scandinavian sector. Altogether the analysis consists of around 66 000 overflights, but to ensure the quality of the reconstructions, the examination is limited to cases with descending (north to south) overflights and maximum elevation over 60°. These constraints limit the number of overflights to around 10 000. Based on this dataset, one solar cycle of ionospheric vertical total electron content estimates is constructed. The measurements are compared against International Reference Ionosphere IRI-2012 model, F10.7 solar flux index and sunspot number data. Qualitatively the tomographic VTEC estimate corresponds to reference data very well, but the IRI-2012 model are on average 40 % higher of that of the tomographic results. 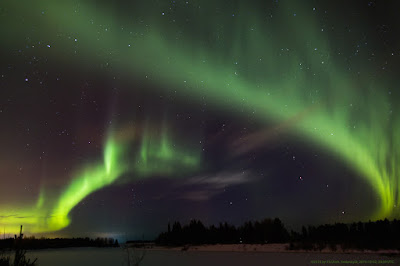 It's been very cloudy this past month, with few clear nights. Often we saw in our instruments that there must have been brilliant lights on the other side of the clouds, but on the ground there was no chance to see anything. Then, on Wednesday evening (2nd December), there were gaps in the clouds and for a brief moment the lights appeared...

With this photo we wish all of you a very good weekend, and those of you in Finland a very good Independence Day on 6th December, when Finland will turn 98. Hyvää Itsenäisyyspäivää!

Posted by Thomas Ulich at 13:04 No comments: