Posted by Thomas Ulich at 11:46 No comments:

EISCAT_3D, the new Arctic radar gets go-ahead for construction

A new international research radar called EISCAT_3D was given the green light to proceed this month, promising a step-change in understanding the effect of solar storms and space weather on the upper atmosphere in the Arctic.

The EISCAT_3D facility will be distributed across three sites in Northern Scandinavia - in Skibotn, Norway, near Kiruna in Sweden, and near Kaaresuvanto in Finland. Each site will consist of about 10.000 antennas fed by a powerful 5 MW transmitter at Skibotn and a receiver at each of the three sites. The total budget is 70 M€ and the project will start in September 2017. Site preparations begin in summer 2018 and the radar is expected to be operational in 2021.

EISCAT_3D will be the world’s leading facility of its kind, offering together with the older EISCAT Svalbard radar a critically important window to the upper atmosphere and the near-Earth space in the European Arctic. As the name suggests, a key capability is to measure a 3-D volume of the upper atmosphere by using the most modern digital and analogue technologies. Signals from the antennas will be combined electronically, and hence the radar can look even in 100 different directions at any given instant.

EISCAT_3D makes it possible to study how energetic particles and electrical currents from space affect the upper and the lower atmosphere as well as man-made technologies such as satellites and power grids on the ground. Also, the aurora borealis can be studied in three dimensions.

The system will be built by the EISCAT Scientific Association, comprising research councils and national institutes from Finland, Norway, Sweden, the United Kingdom, Japan and China. EISCAT_3D is the culmination of a 10-year design and preparation phase, supported by the European Union. The Academy of Finland finances the investment with 12.8M€, which includes funding from the University of Oulu of 756,000€.

In Finland, the EISCAT_3D project is co-ordinated by University of Oulu and its independent department Sodankylä Geophysical Observatory. Observatory director Esa Turunen states that the decision means a significant investment in Finland, Sweden and Norway for the next 30 years. The economic implications will be multifold.

Professor in Space Physics Anita Aikio tells that the EISCAT_3D project is very important for Finnish space research: “For the first time, we can measure in three dimensions the effect of energetic particles and electrical currents from space on the upper and middle atmosphere simultaneously. This makes it possible to find connections between space physics and atmospheric physics.”

For further information please contact:
Posted by Thomas Ulich at 11:45 No comments:

A recent collaborative study between ISEE /Nagoya University and SGO/University of Oulu (+ other institutes) has been accepted to be published in Journal of Geophysical Research: Space Physics, please have a look: 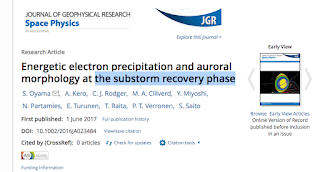 This paper shows a linkage between different auroral morphological structures and the energy spectra of the associated electron precipitation. The study is based on a selected set of case studies combining the EISCAT radar and the KAIRA spectral riometer measurements with the auroral camera observations.

A paper was recently accepted for publication in Geophysical Research Letters. It presents the results of a comparison between optical data from an all-sky camera and cosmic noise absorption data measured by KAIRA above Kilpisjärvi, during a pulsating aurora event.

The accepted version of this article can presently be accessed here; the preliminary reference is:

Abstract
This study investigates the contribution of energetic (E > 30 keV) particle precipitation during a pulsating aurora event over Kilpisjärvi (L = 6.2) on 26 February 2014. It is based on the comparison of auroral blue-line emission (427.8 nm) data from an all-sky camera and cosmic noise absorption (CNA) data obtained from a multi-beam experiment of the Kilpisjärvi Atmospheric Imaging Receiver Array (KAIRA) riometer. The data sets are compared for three KAIRA beams close to magnetic zenith. Results show a clear correlation between the measured CNA and the auroral blue-line emission during the event, for each beam. In addition, individual pulsations are observed for the first time in the CNA data measured by KAIRA, and are found to be close-to-identical to the optical pulsations. This suggests that the modulation of electron precipitation during pulsating aurora takes place in a consistent way over a broad range of energies.