Increased levels of carbon dioxide and methane are well known to warm the atmosphere. However, this phenomenon is predicted to cool the thermosphere, i.e. the upper atmosphere. In order to study this phenomenon, we have considered Sodankylä hmF2 data (obtained from ionosonde data analysis) with dynamic linear models and tried to estimate the long-term trend of the so-called F2-layer peak. 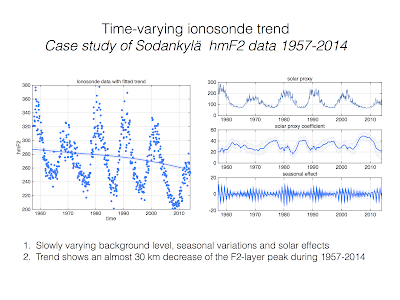 In our new method, we use an additive model composing of a slowly varying background level (i.e. the long-term trend), seasonal variations and solar effects (F10.7 used as a solar proxy). The nice thing about dynamic linear models is that the analysis output gives us estimates for all the model components with error bars. Also the seasonal variations can be seen to be modulated by solar activity. We conclude that we see an almost 30 km decrease of the F2-layer peak during 1957-2014. We also note that the trend is not linear. However, as this is a 'point measurement', we do not conclude anything about global trends - these need to be studied in subsequent papers!

Our study has been accepted for publication in Journal of Geophysical Research - Space Physics. Early access version can be downloaded here! Reference is:

This paper is part of a special issue titled "Long-term Changes and Trends in the Stratosphere, Mesosphere, Thermosphere, and Ionosphere,  JGR-Atmospheres/Space Physics, 2014".

... and here is the title and abstract:

We discuss trend analysis of non-stationary ionosonde hmF2 time-series measured at  Sodankylä Geophysical Observatory  (67.4$^\circ$N, 26.7$^\circ$E), Finland, 1957-2014. We model the hmF2 with a dynamic regression time-series model with the following components: a slowly varying background level, seasonal variations and solar effects. We analyze the time-series with a dynamic linear state-space model. Such an approach allows model components to vary in time, allowing us to study the dynamic stochastic nature of the underlying long-term trend. This feature is lacking in most time-series models used in atmospheric and environmental long-term trend analyses. Our objective is to understand the long-term hmF2 trend with respect to increased levels of carbon dioxide and methane in the atmosphere. Based on model estimates, this phenomenon is predicted to cool the thermosphere, and, leads to decrease of the altitude of the so-called F2-layer peak. After accounting for the effects of solar activity variations on the data, we see that the estimated trend shows an almost 30 km decrease of the F2-layer peak during the observation period. The decrease of the peak during 1990-2010 is significantly greater than during earlier observation period.